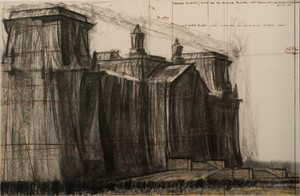 
Medium and Support: pastel and charcoal on paper
Credit Line: Gund Gallery Collection; gift of Mr. and Mrs. Graham Gund â63
Accession Number: 2015.2.7
Christo & Jeanne-Claudeâs pastel and charcoal study made in 1977 represents the early planning stages of the wrapping of the Reichstag, a project that was fully realized 18 years later in 1995. The delay of wrapping the national capital had to wait till the re-unifiication of Germany due to cold war tensions. The project was financed through the sale of drawings and collages of the wrapped structure. More than five million people visited the wrapped Reichstag in the two weeks it was exhibited.

Your current search criteria is: Portfolio is "Drawings".