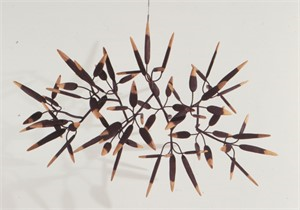 
Medium and Support: oak and steel
Credit Line: Gund Gallery Collection; gift of Mr. and Mrs. Graham Gund â63
Accession Number: 2015.2.53
White-Tipped Blooming by contemporary artist James Surls (b.1943) hangs in the northern-most end of Dempsey Hall in the Thomas Hall Dining Room on Kenyonâs campus. The steel and oak chandelier-like piece is inspired by tree branches laden with large budding flowers. Surls is an American artist who has derived much of his artistic inspiration from nature and the landscape of East Texas. After graduating from Sam Houston State Teachers College in 1966, Surls earned an M.F.A. from Cranbrook Academy of Art in 1968. Throughout his career, he has developed a handcrafted, rustic aesthetic that has taken form in drawings, prints and sculptures depicting natural and human forms. White-Tipped Blooming exemplifies many outstanding characteristics of Surlsâs oeuvre, which call to mind the artistic traditions on which he builds his practice: the unique oak-and-steel construction consists of expressively carved biomorphic forms that conjure primitivist aesthetics and mythical imagery of early 20th-century avant-garde sculpture, while the humble, organic materials pay homage to American folk art. Surls has exhibited widely across the country, and his work is housed in dozens of prominent institutions such as the Los Angeles County Museum; the Dallas Museum of Fine Arts; the High Museum, Atlanta; and the Whitney Museum of American Art, New York as well as numerous private and corporate collections. In 2009, nature-influenced large-scale sculptures by Surls were featured on the malls along Park Avenue in NYC through a program managed by the New York Cityâs Public Art Program. Now based in Colorado, Surls continues to produce and widely exhibit his bronze, steel, wood and mixed media three-dimensional works, in addition to drawings and prints.