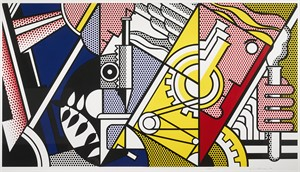 
Medium and Support: lithograph and screenprint in colors
Credit Line: Gund Gallery Collection; gift of Mr. and Mrs. Graham Gund â63
Accession Number: 2015.2.25
Hanging in the main stairwell in Tomsich Hall, a science building on Kenyonâs campus, itâs fitting that the iconography for LichtensteinâsÂ Peace Through Chemistry IIÂ focuses on a chemistâs lab. Divided into three panels with a distinct black diagonal running through each, the roundness of the test tubes, microscope, and various gears contrast with the sharp, linear diagonals. The stylized rays in this composition, coupled with the primary colors, contribute to the comic-book quality of the piece, implying that the chemist is a superhero. The celebratory tone of the work may be ironic, though, considering that Lichtenstein made the piece in the 1970s, an era when the United States military utilized harsh chemicals such as Agent Orange as part of the warfare program in Vietnam.
Lichtenstein, dubbed a Pop Artist, took inspiration from comic books and incorporated text, primary colors, and Benday dots in his compositions to create stylized works reminiscent of post-World War II popular culture. He collaborated with printmaker Kenneth Tyler for the creation ofÂ Peace Through ChemistryÂ in lithograph and silkscreen editions to emulate the production means of comic art.