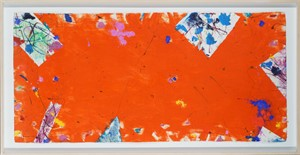 
Medium and Support: monotype printed in colors on handmade paper
Credit Line: Gund Gallery Collection; gift of Mr. and Mrs. Graham Gund â63
Accession Number: 2015.2.12
Sam Francisâs untitled monotype composition signals the culmination of the artistâs career-long investigation of abstract painterly procedures: the aggressively stroked red field and chance application of colorful drips and blots energize the surface of this broad horizontal frame, synthesizing the dynamism of Jackson Pollockâs drip paintings and the powerfully reductive aesthetics of Color Field painting of the 1940s and 50s. As one of the most prominent second-generation Abstract Expressionists, Francis advanced the formal experiments of the New York School by incorporating a range of other influences into his idiom. Working closely with abstract painter Jean-Paul Riopelle in Paris in the 1950s, Francis explored new painting techniques and the use of color for emotional expression, which coalesced into large scale-compositions dominated by a single, vivid hue. Color enabled Francis to delve into deep metaphysical questions, which he drew from his exposure to Japanese contemplative traditions and the flourishing interest in Eastern philosophy and mysticism among his fellow artists in California, where Francis settled in 1962.Â UntitledÂ continues this inquiry: the fiery red field, penetrated by white rectilinear forms entering the composition at shifting angles around the perimeter of the frame, is a kinetic plenitude that exudes the energy of the artistâs mind and spirit. This piece comes from the artistâs prolific output of etchings, lithographs and monotypes, which helped foment the printmaking renaissance on the west coast beginning in the 1960s, inspiring new experiments with printmaking in decades to follow.