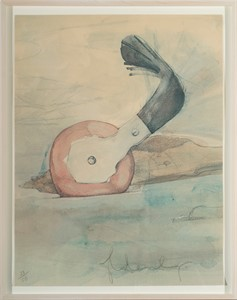 
Medium and Support: color-offset lithograph in four colors on white, thick, slightly textured Arches paper
Credit Line: Gund Gallery Collection; gift of Mr. and Mrs. Graham Gund â63
Accession Number: 2015.2.39
Initially drawn to the typewriter eraser as âa fine anti-heroic subject,â Oldenburgâs lithograph print imbues a commonplace item with personality. The subtle blurring of the lines and colors suggests an energy, giving new life to the utilitarian tool. Oldenburg elevates the eraser in its isolation, transforming a practical item into an icon and memorializing the materialism of American society. The muddled, pale blue background of the print implies texture, invoking the spirit of the soft sculptures that make up much of Oldenburgâs work. Evidence of Oldenburgâs lithograph print is echoed in the three larger statues in his series, Typewriter Erasers, as well as in several of his other prints and drawings. However, the pieceâs original purpose as a proposal for a monument for Alcatraz Island never came to fruition, much like many of Oldenburgâs imaginary anti-monuments. Like these other contemplations, the proposal questions the status of the commemorative statue, replacing the classic heraldic symbols of the nation with a different form of Americana. Given the postmodern power placed upon banal objects, the eraser suggests the dual whimsy and potency of kitsch and serves as an alternative symbol of the spirit of the time.

Your current search criteria is: Portfolio is "Prints".