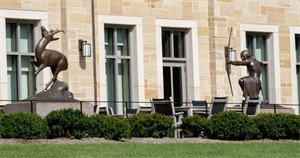 
Medium and Support: bronze
Credit Line: Gund Gallery Collection; gift of Mr. and Mrs. Graham Gund â63
Accession Number: 2015.2.27
As anÂ arrow sinks into the back of a hunterâs prey,Â Indian Hunter and AntelopeÂ captures a dynamic, highly charged moment. Located on the East Terrace of Peirce Hall, Kenyon Collegeâs dining hall, the location leads to questions about the ethics of hunting and fosters dialog concerning the complicated issue of food production and delivery. Paul Manship was a sculptor generally thought to be an influence upon and exponent of the American Art Deco movement. His clear, linear style was largely inspired by archaic Greek, Roman, and Indian art. Ancient influences are apparent in his Neoclassical works, such as the idealized form ofÂ PrometheusÂ at Rockefeller Center in New York.