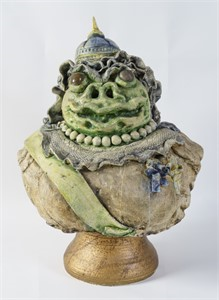 Bust of Victoria, Her 101st Year as Queen


Medium and Support: glazed ceramic
Credit Line: Gund Gallery Collection; gift of Mr. and Mrs. Graham Gund â63
Accession Number: 2015.2.13
Adorned in pearls and a raggedy royal costume, David Gilhoolyâs satirical depiction of Queen Victoria as an aging frog pokes fun at high culture with an absurd and comedic style. A part of Gilhoolyâs series âFrog World,â Bust of Victoria is a sardonic commentary on aristocracy and ascendency in society. Expanded upon over the course of his career, the series, launched in the mid-1960âs, features a wide range of pop-culture personas existing in an alternative universe of ceramic frogs. Taken from this imaginary realm, the grotesque portrait bust is incongruous as an iconic figure of imperial power and underscores Gilhoolyâs irreverent take on societal mores.Â

While assisting sculptor and ceramicist Robert Arneson at the TB9 studio at UC Davis, Gilhooly became a member of a circle of artists who established the Bay Area Funk Art movement. Spawned during the revolutionary sixties, the movement marks a dynamic artistic, political, and societal moment where rebellion against social norms and the establishment of new modes of expression took hold.Â The Funk Art movement influenced the development of contemporary American ceramics through its use of unconventional subject matter and embrace of an anti-establishment ethos.