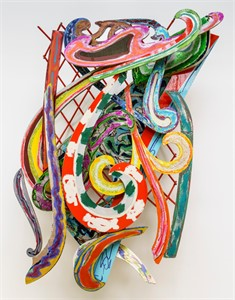 
Medium and Support: mixed media on corrugated aluminum
Credit Line: Gift of Mr. and Mrs. Graham Gund â63
Accession Number: 2015.2.47
Sat BhaiÂ boldly demands attention, both with its huge size and aggressive dimensionality. The immense, brightly colored baroque curls appear frozen in some sort of leap away from the wall, causing the piece to appear almost like a relief sculpture. Stella describes his own work as âmore than two dimensions but short of threeâ¦â [1] where the viewer is able to receive unique views by changing their location in relation to the piece, while still having a definite front. Due to this multi-faceted dimensionality, the composition, like the large-scale minimal canvases typical of Stellaâs earlier career, creates a truly immersive space. This, however, is achieved in a very unique and atypical way. While most artists working in two dimensions make use of illusionism and perspective to create space, Stella believed that, in the day and age in which he was working, these techniques were no longer effective. Instead, he made use of overwhelming scale and physical space to create this depth. When viewed from straight on, the separate floating shapes, that at first glance appeared jumbled and chaotic, fit together carefully and with obvious calculation. The amorphous curves and swirls meet edge-to-edge and often point-to-point, giving the piece an aspect of unexpected and precarious delicacy. This in turn emphasizes the ephemeral temporality of the urban scenes he strove to capture in this piece and the rest of his Indian Birds series. Overall the piece served as a momentary snapshot of a busy street full of saturated fabrics, bright cosmetics, and glittering jewelry.